What's on your mind?

I was watching TV at just gone 10 last night and an ad came up which stated that the Series 15 Auditions are now open. For anyone who wishes to apply who contributes to this wiki the link to applications will be placed below:

Usually I wouldn't do this, however in order to help @Autsuimpeoplematter has decided to provide this link in relation to BGT Stuff. Due to this I have made the decision to promote this here, before then going on to delete the page that he created for it.

Edit: Should have checked the code beforehand as it has since expired. If or when he creates a new one he will hopefully post it here.

Basically what I am asking is what is the strangest thing you have noticed when re-watching auditions that you did not realise before?, or 'What did you learn about acts via the press that you never knew before'? However I can't actually title this post that as it's too long a title. For fairness purposes you can't really say that when rewatching a magicians performance you 'knew exactly how they did the trick', this is more background details. So I was rewatching a couple of magicians performances last night (Namely Magical Bones, Jasper Cherry, James & Dylan Piper, & X), and I noticed something that slipped past me the first time with Magical Bones & X.

Now this was not however either of them conducted their magic tricks, this is completely different and unrelated to that. So in his audition Magical Bones showcased what looked to be a sketch of what Henry Box Brown would wear. At the end of his audition, Magical Bones wore similar attire, however during both the Semis and the Final, he wore similar attire once again bar a couple of colour changes. However this was not the biggest of the two things I noticed. In the case of X, I fell asleep and never watched the result or him perform again, so I never knew he was Marc (Okay, yeah this first part of the X discovery is set up as a joke, however we'll get to more serious stuff now). What I actually noticed with X is that when he showed a VT before removing his mask a John Lennon book was seen beside his daughter Isabella in her cot. Some of you may believe I am reading deeper into this then I probably should, however I disagree, as you see in the S12 Semi-Finals he at one stage created a picture of Ghandi, and guess how his performance ended? It ended with Spelmann mixing up each of the pieces, in order to create an image of John Lennon! So Basically I think when he revealed himself as X towards the end of the VT that was shown, this book was placed in Isabella's cot beside her, in order to make reference to his S12 Semi-Finals performance!

In terms of the Second question I asked above, for me it is that Paul Hunn was talent scouted in S2 & S3 however refused to audition, however auditioned in S4 and was buzzed off and laughed at (He was scouted as he's The World's Loudest Burper and has been since 2009, so perhaps in 08, the talent scouts knew as to what he were trying to achieve maybe?), and that according to DailyMail Diversity never auditioned on their own accord, they were talent scouted. Just to end off my portion of this discussion Hunn was actually on ITV's Game of Talents in it's first episode which was broadcast back on Saturday 10th April, wherein he displayed his talent of being the 'World's Loudest Burper'.

Just as a final note, feel free to notate any discoveries that you found from re-watches or external media below. I look forward to reading any replies that are posted below, however I most probably will not always be replying to them.

I wanted to see what Charlie Placais was up to after AGT & BGT and found him to have auditioned for Spain's Got Talent S5 in 2019. However there is just the one clip of him and his audition but he got 3 yesses and made the next round. So do Spain have a 2nd round like BGT and was he eliminated in the 2nd round, or do they have a Judge Cuts like AGT therefore meaning he either withdrew or was disqualified or eliminated beforehand? I'll post the proof of this below (If you are on PC you can translate the article to English): 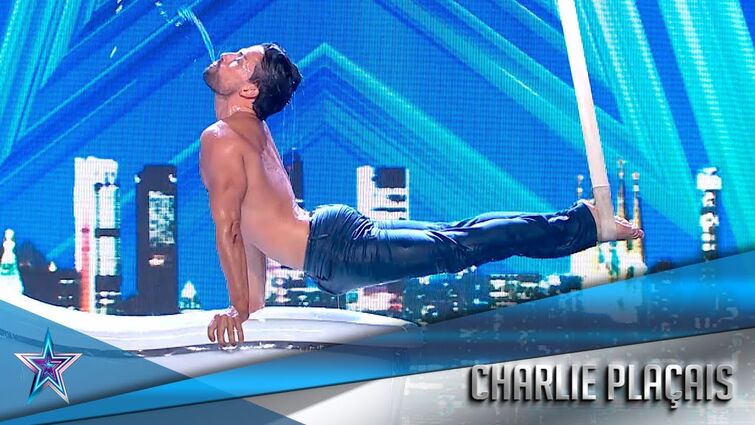 So I searched the wiki yesterday and sometimes when you scroll down it shows the latest tweets from the BGT official Twitter account. However I was amazed to see a tweet which stated that this year the show will have a Christmas Special, at 8pm Friday 25th December aka Christmas Day. So my questions here are simple, question 1 why do you think we are having this special? I think it may be due to the COVID-19 Pandemic personally, as I'm doubtful that Series 15 will premiere Christmas Day or premiere series 15 episode 1, then have us wait for the remainder of the auditions. Question 2 however is what do you think this special will entail? I don't feel as if it will be a series 15 premiere, and I believe it's probably going to be another clip show, which dismays me a little bit as with so many Untelevised Acts between 14 series I'd perhaps like a special were a 'Top 10 most memorable untelevised acts' had their auditions televised, or if it was treated as a special episode for several Untelevised Acts from the last 14 years to finally have their auditions televised, and actually show us the judges reactions and feedback. However as I've said already my best guess is it'll be a clip show, however what would you personally like the Christmas Special episode to have a focus on in terms of BGT?

Edit: I do feel that maybe they were aiming for Boxing Day in reality, however had the timeslot taken away from them by The Masked Singer UK, Series 2 premiere perhaps, and didn't want to be aired after the premiere as they wanted the specific 7pm timeslot, with 8pm being the latest, however perhaps the premiere of Masked Singer will overshoot that, so instead of airing after that, it's being aired Friday which is a little out of the ordinary as I think the last time anything was ever aired on a Friday was the 'Sport Relief' Los Chorizos skit audition on the BBC back in 2012 with the Series 6 auditions. Also has a Christmas special for BGT ever aired before in the last 13 years, as I can't seem to remember any taking place before this year?

This news has been pretty inescapable for BGT fans over the past week, and to my great relief Ofcom have stated that they will NOT be investigating the performance after recieving over 24,000 complaints. ITV have also defended the performance.

Feel free to discuss the moment that provoked a lot of 'controversy' (aka racist remarks) here.

Thought the last thread was getting a bit large so making a new one for the live shows.

As we're all probably aware, Simon has injured his back in a crash and will be replaced by Diversity star Ashley Banjo. The finalists will be revealed this Sunday and the Semis will be airing on a weekly basis to spread the show out longer.

Discuss all in here!

What do you think?

To win the show at 89 was just amazing!

(edited by A Fandom user)
Series 13
I think definitely by a mile yanis Marshall from series 8. First act to be buzzed in the final Light balance should have been in their place
(edited by Madmeggymoo)

Usually im not big on choirs.

Sign Along with us is a different kind of Choir though. Best choir in got talent history.

I actually think they can win BGT.

I want to hear everyone talk about stupid acts the judges put through. Vitaly & the deep space deviants somehow made the semi's over so many better acts from series 10.

(edited by administrators)
The trailer for Series 14 is out now! Who knows how far we'll actually get into it with Coronavirus etc. but presumably the auditions have already been recoorded so we'll get those at least.
(edited by PeteFromLeeds)

i was watching alexia lauenburgers preliminares performance and when she was talking to the judges i noticed she was figeting , shaking her legs , and putting her hands by her crouch . she ran off the stage in the end like in a way of needing to pee type of run. all common signs of needing to pee. i think she had to pee while talking to the judges. everyone else agree.

Having spent about 4-6 hours (most of it was 1.30 adding images yesterday, and 3 or 4 two days ago watching YT clips). I have come to two conclusions A:even if an act audition is televised on BGMT it'd be cool if they had pages as they too auditioned. Also B:there are a few unexpected gems. So my question is simple, who were your unexpected gems from BGMT 2019? For me Kalutskih/Chetverkin was far too similar to Vardanyan and Giang Brothers (I do understand that it was meant to be). Yet Jason was actually great. I mean I really liked personally Pontus Lindman it was quite the gripping act, and I don't believe (correct me if I'm wrong here if anyone can please) that anyone has ever done a water based magic trick before that on BGT (even if televised on BGMT). Another great magician was Tomas McCabe, I mean I think potentially a couple of these ran out of time on the main show, but I'd have loved to have seen Pontus and Tomas in the semis (I doubt they'd make the finals). Jason not so much as I think it'd be far too similar to his audition, and Kalutskih and Chetverkin another no as i wouldn't want two Vardanyan brothers like acts in the semi finals, for me it'd be one or the other personally. I mean these are just my opinion, feel free to tell me yours.

(edited by Return of the lo)
Series 13

After her appearance on Lorraine chatting to relief presenter Christine Lampard as Lorraine was taking her summer break, I have but two new questions for you all! I'm sure many of you may know by now that I am grandpa lo68 but on another account, as I forgot the account password, made this account then remembered the password to the old account. I decided to continue using this account for simplification reasons here however though. Anyway my two questions are do you think it was fair, practical, and right that she waited backstage alone, even if it was by choice? She stated that she had done so on Lorraine. My second question is this do you think it's fair before a ten year old performs to tell them not 'to mess it up as thousands of people are going to be watching', as surely it would arise far stronger nerves within them, don't you think? Also once again she stated the above on her 'where are they now' Lorraine appearence this morning at the age of twenty one now. Please leave your opinions below in the comments section. Kind Regards 'Lo

(edited by Return of the lo)
Series 3Hollie Steel
Guidelines